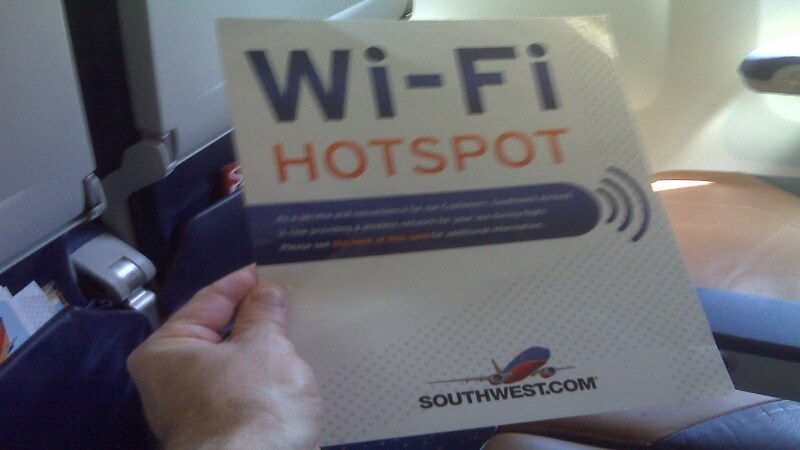 Southwest Airlines has one of the most efficient and affordable in-flight Wi-Fi – along with other fantastic perks. With a fully Wi-Fi-equipped aircraft, gate-to-gate interconnectivity, and affordable pricing packages, flyers now have a seamless internet experience while flying onboard Southwest.

Southwest Airlines, commonly called Southwest, is the leading airline by global market valuation. From its control office in Dallas, Texas, U.S., it operates over 4,000 flights daily with about 747 all-Boeing 737 aircraft.

With an operational record of 103 destinations in all parts of the U.S. and ten other countries, Southwest is also the world’s leading budget airline carrying more domestic passengers than any other airline in the U.S.

The Dallas-based air carrier started experimenting with Wi-Fi with Row 44 (a broadband internet provider later bought by Global Eagle Entertainment in 2012) as far back as 2009.

In 2010, it began offering its satellite-based in-flight Wi-Fi with a $5 per flight fee, irrespective of flight distance. The outfitting continued with initial plans of finishing up with the Wi-Fi installations at the close of 2012.

2013 – 2019: As of 20th November 2013, the airline marked a milestone by becoming the first U.S-based airline to offer gate-to-gate interconnectivity aboard its fleets serviced by its network partner, Global Eagle Entertainment.

Then on 13th December 2016, Panasonic signed a deal with Southwest and began a partnering service provider alongside Global Eagle Entertainment to boost quality in-flight connectivity and entertainment for air travellers.

However, the Southwest-Panasonic partnership ended in 2019 for officially undisclosed reasons. The airline’s spokeswoman, Michelle Agnew, only stated that the separation was mutual from both sides. Yet, some people speculated that the fall-out might be due to many complaints about inconsistent Wi-Fi service received from customers onboard.

Presently, the low-budget airline has its entire fleet outfitted with top-speed, satellite-based Wi-Fi with other fantastic features added regularly.

Southwest is one of the few Airlines that owns a fully Wi-Fi-equipped aircraft. It operates a total of 747 fleets made up of solely Boeing 737 aircraft and is, therefore, the largest operator of Boeing 737s in the world.

The entire Boeing 737 aircraft in its fleet as of December 2019:

How To Detect If Your Flight Provides In-flight Wi-Fi

Though Panasonic Avionics was at some point a partner to Southwest, Global Eagle Entertainment has always been the main, and currently the only, service provider of satellite-based in-flight Wi-Fi to Southwest.

It grew as a merger of various internet companies and, in 2012, also acquired Southwest’s foremost satellite-based network provider, Row 44, and expanded its operations.

As a notably known low-cost airline, Southwest kept up to that legacy by offering its top-speed satellite-based Wi-Fi price at a fixed rate of $8 for each device per flight. This rate is on the reasonable side considering the perks that come with it:

Previously, Southwest passengers paid $2 per device for an entire day of messaging. But now, the air carrier offers FREE messaging services to flyers onboard. The free service, however, only works with iMessage and WhatsApp.

Asides from Southwest, you can get a similar offer only on Alaska Airlines and Delta in the United States.

Surprisingly, you can still get internet Wi-Fi for FREE on Southwest by just being an A-list Preferred Member. As part of the Rapid Rewards Program, this elite status awards free-of-charge Wi-Fi on all aeroplanes – along with some benefits, to members when they log in with their Rapid Rewards account details.

Other Features Of Southwest Wi-Fi

See also  Does Breeze Airways Have WiFi Onboard? [LATEST UPDATE]

Global Eagle Entertainment (GEE), the long-time partner of Southwest, always works to maintain a high-class experience for its client’s customers and has made a series of improvements to the airline’s in-flight entertainment service.

Pre-2019, customers needed to pay for Wi-Fi before accessing movies onboard Southwest’s aircraft but all that changed when the airline announced its free movies offering on 1st November 2018. Now Southwest Airlines has a 100 per cent free in-flight entertainment offering onboard its entire fleet.

There is no requirement for passengers to purchase daily $8 Wi-Fi to watch and enjoy the various movies on offer using the Southwest app.

Southwest offers a series of entertainment options to select from via the in-flight entertainment web portal onboard Wi-Fi-equipped aircraft.

These options include the following:

Free Movies: Over 30 free movies are accessible monthly and regularly updated to accommodate the latest movies across Hollywood.

Live TV: Live TV channels are accessible on air on Southwest. From various news channels to sports, passengers get the latest happenings and watch their favourite games while flying. The different TV channels include:

Free Music: In partnership with iHeartRadio, Southwest offers free music and music videos for passengers’ listening delight. Subscribers to iHeartRadio can enjoy the entire music library and their favourite playlists.

Other In-flight Entertainment of Southwest Airlines

Additionally, customers can track routes and learn more about their destinations from the in-flight entertainment web portal.

Other Features Of In-flight Entertainment On Southwest

List Of Supported Devices And System Software of Southwest Airlines

Below are the minimum device and system requirements

Supported browsers are the latest versions of Chrome, Apple Safari, and Microsoft Edge.

Southwest Airlines charges a daily $8 fee for its in-flight Wi-Fi. However, it is free for A-list Preferred Members.

The entire Boeing 737 fleet of Southwest Airlines provides in-flight Wi-Fi for passengers onboard.

Will I get a refund for poor Wi-Fi service?

Visit the Contact page to request a refund if you experienced a poor Wi-Fi connection on board.