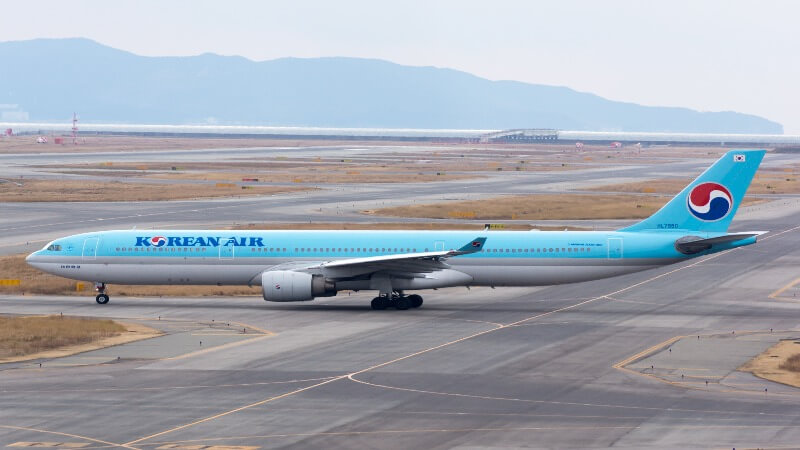 In Asia, most airlines have implemented the in-flight Wi-Fi feature onboard most, if not all, of their flights. But Korean Air is among the few airlines yet to install in-flight Wi-Fi on the aircraft- though with seemingly good reason.

We mailed Korean to know about their inflight wifi. They sent us this reply:

South Korea’s flag bearer, Korean Air, is the biggest airline in South Korea. It owns 153 fleets covering up to 120 domestic and international destinations, with its control centre located in Seoul, South Korea.

The airline is yet to incorporate in-flight Wi-Fi on its aircraft, probably in a bid not to disappoint its passengers who would expect quality internet Wi-Fi connectivity on flights for leisure, social, or business purposes.

South Korea is a country known for its speedy internet, the 9th fastest in the world, according to Statista.

With a fixed broadband internet speed of 219.05 Mbps, it is safe to say that its citizens are accustomed to high-speed internet on-ground.

In comparison, the in-flight Wi-Fi onboard aeroplanes are much slower.

Airborne Fluctuations caused by flying over restriction zones, the absence of cell towers over the Pacific Ocean (in the case of air-to-ground Wi-Fi), and switching between satellites (in the case of Satellite Wi-Fi) all lead to the slower internet speed.

In a 2016 interview with APEX magazine, he stated that South Koreans would be dissatisfied with the quality of accessible internet service onboard with current commercial satellite technology.

Korean Air offers quality in-flight entertainment for its customers as an alternative to having in-flight Wi-Fi on flights.

It provides entertaining audio and video content via seatback monitors of varying sizes, while headsets are provided for first-class passengers onboard.

Also, in May 2021, the airline partnered with Inflight Dublin, a global supplier of wireless in-flight entertainment (IFE) services, to improve customer satisfaction.

The development began with a 6-month free trial on their A220 fleets providing audio and video on demand (AVOD) content for passengers.

Now, passengers onboard A220 airplanes can connect their mobile devices to the in-flight Wi-Fi and enjoy uploaded movies, audios, TV shows, and more during flights.

However, there are no seatback monitors on the A220 aircraft, so one can only connect to the in-flight entertainment system using their own mobile devices.

How To Connect To Wireless Entertainment On Korean Air’s A220?

How To Cope Without In-flight Wi-Fi Onboard Korean Air?

In answer to the question on Quora, various people suggested how one can stay engaged mainly during long-distance flights without internet Wi-Fi.

Suhaimi Fariz commented that he slept, watched movies, listened to music, and walked along the aisle throughout his flight. Sid Ram also suggested playing games on a personal device or using the in-flight entertainment system via the seatback monitors.

Understandably, Korean Air is still delaying the installation of Wi-Fi on its aircraft to avoid delivering poor service.

They can, however, meet the passengers’ desires in the middle and set the limit of what they can get from in-flight Wi-Fi rather than zero connectivity.

What Is The Pricing Of In-flight Wi-Fi On Korean Air?

Korean Air is yet to equip its aircraft with in-flight Wi-Fi. Therefore, there is no pricing available.

How Do You Connect To In-flight Wi-Fi On Korean Air?

No internet Wi-Fi is available for connection on Korean Air.

Korean Air does not have a partnering company for Wi-Fi provision.

None of its fleets offers onboard Wi-Fi service.