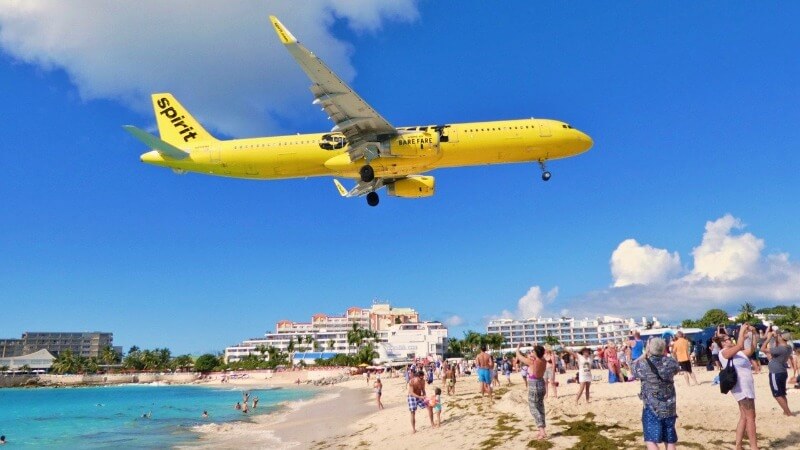 Spirit Airlines, headquartered in Miramar, Florida, is a notable low-cost carrier operating flights throughout the United States, the Caribbean, and Latin America. In other words, passengers on a tight budget prefer it because of the cheap ticket costs.

How Spirit Airlines Got Their In-flight Wi-Fi?

According to Seth Miller on Patex.Aero, in May 2018, Spirit Airlines disclosed their beginning plans to equip their fleet with in-flight Wi-Fi starting with A321 trials the same year.

With Thales Inflyt as the integrated service provider, the installation of antennas on the aircraft began. However, glitches occurred that caused a delay in the initial plan of getting the entire fleet equipped by the summer of 2019.

After replacing the previous antennas, the project resumed, and by October 2021, the whole A321 airplane got outfitted with in-flight Wi-Fi. Therefore, passengers flying onboard the A321 planes can now enjoy connecting to the internet during flights.

Meanwhile, installation is almost finalized on the A320 fleets, while modifications of the A319 planes were pending. Yet, with the installation speed, all the airplanes will get internet Wi-Fi in no distant time.

Also, the satellite Wi-Fi would have broad coverage and speed, courtesy of a modern satellite by Thales Inflyt.

According to the customer support page on their website, trials for in-flight Wi-Fi are still ongoing for some aircraft on Spirit Airlines.

As a result, passengers onboard these specific aircraft would have access to in-flight Wi-Fi and enjoy internet connectivity.

How Does In-flight Wi-Fi Function On Spirit Airlines?

Spirit Airlines’ in-flight Wi-Fi operates on SES-17, a high-capacity Ka-band satellite launched on October 23, 2021. According to Craig Olson, Vice-president of Thales Inflyt for connectivity solutions, this low-cost carrier would be the first airline to use the SES-17 satellite.

Thales Inflyt provides in-flight Wi-Fi for Spirit Airlines via their FlytLIVE brand using SES-17, a Ka-band satellite built by Thales Alenia Space. SES-17 is owned and controlled by SES, with Thales InFlyt as its partner for the aviation sector, while HughesNet JUPITER™ System provides on-ground satellite services for the SES-17.

When completed, in-flight Wi-Fi on Spirit Airlines would have 100 per cent coverage of all the routes as reported on their customer support page.

Official prices for Wi-Fi packages onboard Spirit Airlines are still undisclosed on their webpage as they are still on trial.

In other words, Wi-Fi would be accessible at affordable rates pending the trial’s conclusion.

Still, some websites speculated on the prices Spirit Airlines might charge for their Wi-Fi. According to the Los Angeles Times, the fee for browsing could be around $6.50 per flight, while streaming could cost up to $9.

Other In-flight Entertainment On Spirit Airlines

Asides from in-flight Wi-Fi, there are no streaming consoles or TVs onboard Spirit Airlines to keep ticket prices as low as possible. Nevertheless, you can enjoy streaming videos and surfing the internet with in-flight Wi-Fi at a reduced cost if you are lucky enough to be in an aircraft offering the service.

Does Spirit Airlines Have Wi-Fi? How Fast Is The Network?

YES. In-flight Wi-Fi is now accessible on Spirit Airlines though it depends on which aircraft you are on.
Also, with the high output of the SES-17 satellite, it is a high-speed network system allowing you to stream videos.

Would I be Notified If My Airplane Offers In-flight Wi-Fi?

Customers are informed about planes offering Wi-Fi before their flights. These aircraft would also have identification stickers on their bodies.

Who Are The Providers Of In-flight Wi-Fi On Spirit Airlines?

Thales InFlyt is the partner and provider of in-flight Wi-Fi services on Spirit Airlines.

How Much Would I Pay For in-flight Wi-Fi On Spirit Airlines? Is There A Refund Policy?

There is yet to be an official price for Wi-Fi on spirit Airlines as there are still test-running the service on selected aircraft. Temporarily, they offer passengers internet Wi-Fi on selected flights at low costs.

Also, you can ask for payback if you had a poor experience while using the Wi-Fi onboard by visiting their webpage and submitting a completed refund request form.

Can I watch Netflix on spirit airlines?

Yes, You can watch or stream Netflix on wifi-equipped aircraft of Spirit Airlines. But you should keep in mind that inflight wifi is not stable at the same speed all time. So sometimes it may buffer or halt down, that you should understand.