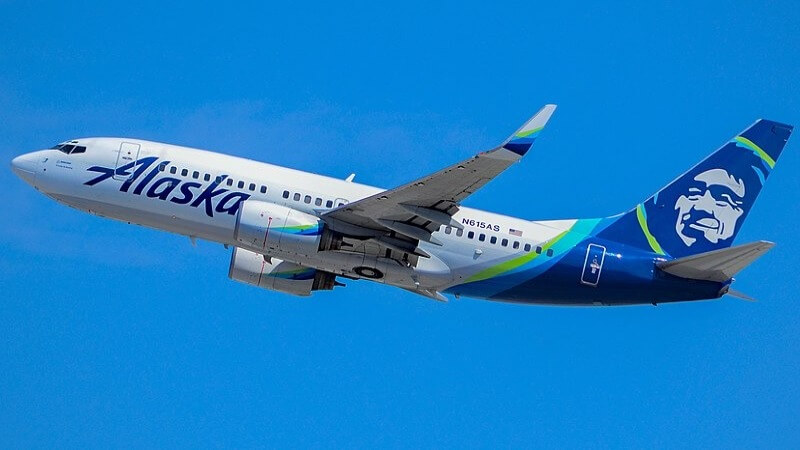 One of the perks of flying Alaska Airlines is getting to stay connected to the internet throughout your flight. The airline is one of many in the United States that provides paid in-flight connectivity to its passengers on most of its aircraft.

The journey began in 2010 when Alaska Airlines went live with the launch of Gogo’s in-flight Wi-Fi service on its domestic flights linking Anchorage and Fairbanks in Alaska.

The installation flagged off with six Boeing 787-800 planes with plans for expansion to the rest of the aircraft by the 2010 end.

It also offered free-of-charge in-flight Wi-Fi to its customers in partnership with Alaska Airlines Visa Signature® till the end of July 2010 to mark the beginning of the new feature.

At the end of the promotional period, the Alaska carrier offered the Wi-Fi service at a starting price of $4.95 for each flight depending on flight length and gadget used.

It presently provides internet Wi-Fi on most of its fleet except a few Boeing 737-9 MAX and the entire Bombardier Q400 that fly short distances.

Alaska Airlines Wi-Fi differs from other airlines’ Wi-Fi in that it features both basic in-flight Wi-Fi service and Satellite Wi-Fi service onboard its fleets.

Your chances of having Wi-Fi access are high when flying with Alaska Airlines because almost all its aircraft have internet Wi-Fi technology installed.

The current list of Wi-Fi-installed aircraft includes the following:

Most of the aircraft – along with all the Airbus fleets, offer stream-quality Satellite Wi-Fi and Basic in-flight internet – excluding the Bombardier Q400 that fly short-distance routes.

How To Find Flights Offering Wi-Fi On Alaska Airlines?

A Wi-Fi symbol is visible on the surface of the aircraft’s entrance door, and written instructions on the service are in seatback pouches on aeroplanes offering in-flight Wi-Fi.

Alaska Airlines offer paid in-flight Wi-Fi service onboard almost all its fleets. You have an option of purchasing before your next flight or aboard your flight, though paying ahead saves more money.

Below is the cost of Wi-Fi when paying ahead on domestic flights (within the United States, Canada, and Mexico):

Cost of Wi-Fi aboard domestic flights (inside the United States, Canada, and Mexico):

How To Connect To Alaska Airlines Wi-Fi?

1. To connect your device to the in-flight entertainment on an airplane with Satellite Wi-Fi:

2. To connect to the in-flight entertainment system on the Basic in-flight Wi-Fi:

Alaska Airlines offers paid Wi-Fi service for its passengers on board most of its fleet except a few Boeing 737-9 MAX and all Bombardier Q400s that fly short-distance routes.

Can I Stream Movies On Netflix On Alaska Airlines’ Wi-Fi?

You can stream and enjoy movies and TV shows on Netflix, Amazon Prime, e.t.c during your flight (only with Satellite Wi-Fi).

Are There Wi-Fi Coupons On Alaska Airlines?

There are presently no Wi-Fi coupons or promotional codes available on Alaska Airlines.

1 thought on “Alaska Airlines Wi-Fi & Inflight Entertainment: A Great Way to Stay Connected and Entertained on Your Next Flight”